Yeah not to happy.

Yeah not to happy. 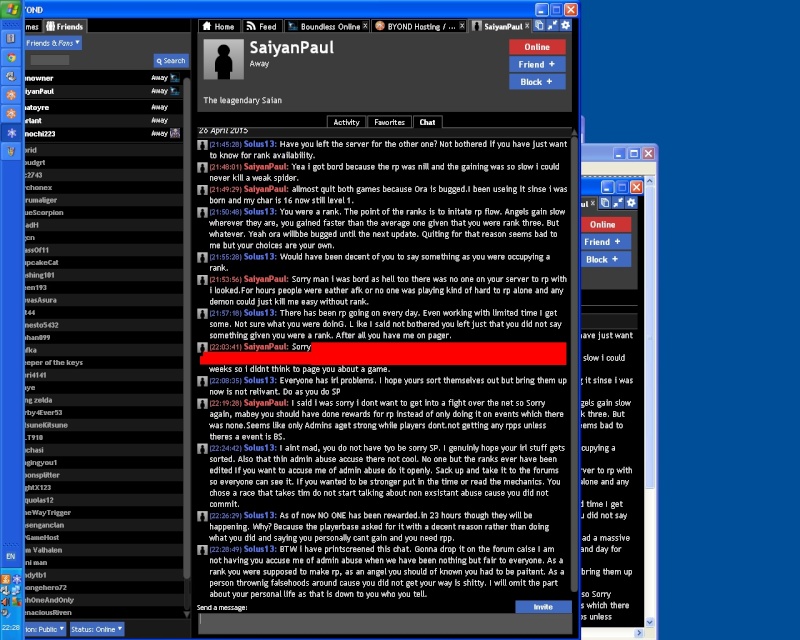 I don't care they quit. Was not even that bothered that they did not tell us that they were abandoning the rank. I will not tolerate admin abuse or false claims of it though. It is hard enough being an uncert server without people making shit up. This chat has been edited to keep SP's personal detail private. It is up to them who they talk about that stuff with.


Edit---
Gluscap if you want to look at the admin logs on the server go for it. If you find any abuse then please make it public.

One sec let me get out my magnify glass.

Pretty sure he just meant that the admins were the only people online. If my catch up system thing was ever implemented, would've cleared that whole problem right up. I Think you overreacted in a less than cool way, although I do understand where you're coming from, I do think you jumped the gun.

Now is not really the time to be advocating for your catch up system even though you may have a point and giving players an easy mode could have stopped SP's accusations. Yes my response after the suggestion of admin abuse has been more intense than usual and there is a reason for it.

Simply put if he had insulted me or said anything else then this conversation would have remained private, yet he hinted at admin abuse. Given that the server is Uncert and I do not want people to feel that this is being taken advantage of I made this public as well as offering/requesting Gluscap to check the admin logs.

As I said in the screencap and I say again now. I am not mad at SP, though I have stopped communicating with him will this has gone on. He is free to play wherever and whatever he likes, butt making false accusations that could damage the integrity of the server is not on.