I was shown my mods by SmD. When I looked at them they were all under 0.7 the lowest of which being 0.51. My character is human and medium. I am not sure if the gains have been affected due to these mods. However it appears other players still have mods in the whole number range given that Roemer character had mods of around 2.1-2.3

Interesting. Maybe it wasn't an error in how mods were calculated after all? Because one of the bugs was how our gains were permanently showing to be children. (6-7.) And the update fixed how mods are calculated so that wouldn't be an issue. . . Or that was the intention at least.

I did as ask SmD about this as it was on his server but after a while he told me he did not know what the issue was. 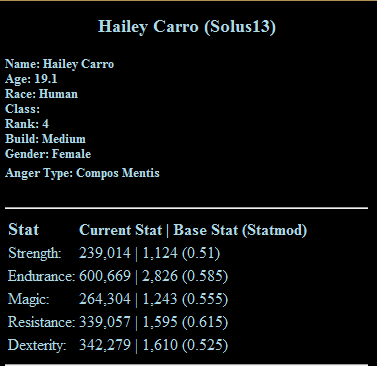 If it helps I will give you info on the character.

Well Gluscap I -only- have information from before the massive update, but this is what it was like before that. Certain humans, not all, who either reached adulthood or would've ascended had their stat mods show up as 7s, and 6s. (I had all 7s, most had 4 7s and 2 6s.) All humans were rank two as far as I know, and some adult, Ora mastered humans still had their normal mods of 12s and 13s. I've never known a rank 1, 3, or 5 human. Everyone I ever checked was 2.

Maybe it wasn't just a bug with how stat mods were calculated, but our mods were actually half normal. It did seem extremely difficult to gain stats at that point. (Not counting Makyuu which was obscenely unfair. If I ever went back i'm pretty sure i'd still be able to one shot anyone.) Its also possible it didn't used to lower our actual gains, but since the game read our stat mods as 7s and 6s, when you updated the game, without the actual character files changing, it read them as half what they should be again.